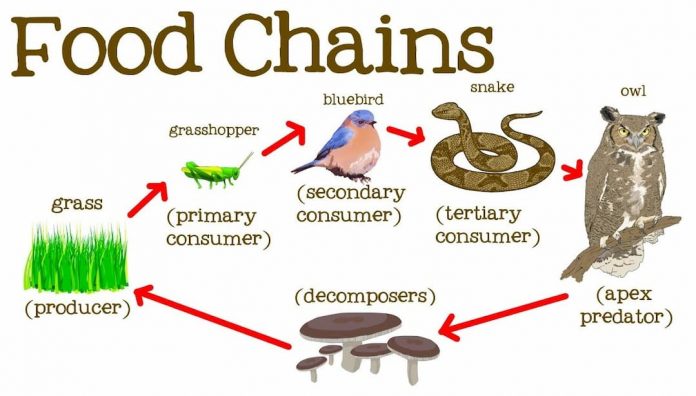 What is a Food Chain? To obtain food, living things depend on one another. Plants make food with the help of sunlight and water. The animals which eat plants are called herbivores. Rabbit, goat, deer and cow are examples of herbivores. The animals which eat other animals are called carnivores. Lion, tiger, crocodile and shark are examples of carnivores.

The animals which eat both plants and animals are called omnivores for example man, bear, birds, and crow etc.

The animals which live in a grassland must be very alert and fast runners to survive in that environment. Why?

Impact of human actions on food chain in an ecosystem

In the ancient times, human actions had little impact on the environment. Now a days, there are very visible impacts of human beings on the environment. After the increase in the population, humans established cities. For this purpose, they cut forests, built roads and made factories. These actions polluted the environment and water resources. Human beings did irreversible damage to the ecosystem of land and ocean animals. The cutting of forests destroyed the habitats of wildlife. Human beings also started unnecessary hunting of animals. Because of .all such activities of human beings, many wild organisms have become extinct and many others have become endangered.

What is the difference between the food chain and food web?

Understanding food chains are vital as they explain the intimate—relationships in an ecosystem. The food chain illustrates how each living thing is connected. The organism is dependent upon other organisms to survive. Food chain This article explains how energy flows within an ecosystem.

As an Amazon Associate I earn from qualifying purchases.