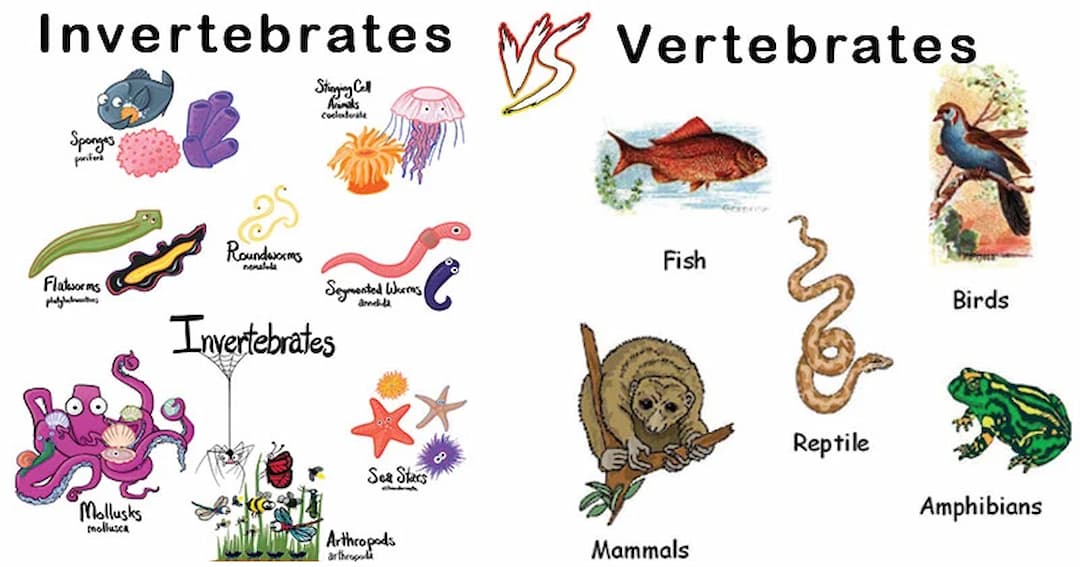 Classifications of animals: Put your hand on the back of your neck. Now move your hand downwards. Did you feel any bone? This is called backbone or vertebral column. How many vertebra are in your backbone?

Animals are divided into two major groups on the basis of vertebral column or backbone.

Vertebrate, also known as Craniata, belongs to the subphylum Vertebrata, the dominant subphylum in the phylum Chordata. Their backbones are what gives them their name. Vertebrates are also distinguished by a muscular system consisting primarily of Bilaterally paired masses and a central nervous network partially enclosed within the backbone. This subphylum is the most well-known of all animal groups. Its members include Agnatha and Chondrichthyes (all fishes); Reptilia and Aves (reptiles); Mammalia and Mammalia. Pictures of some vertebrates are given below:

An invertebrate is any animal without vertebral columns or backbones instead of the bony vertebrates or cartilaginous. More than 90 percent of all living animal species are invertebrates. Worldwide in distribution, they include animals as diverse assea stars,sea urchins,earthworms,sponges,jellyfish,lobsters,crabs,insects,spiders,snails,clams, and squid. Invertebrates play a vital role in the transmission of parasitic diseases to humans and other vertebrates.

Invertebrates are food for humans, key components of food chains that support birds and fish, and essential invertebrates play an essential role in plant pollination. Despite providing critical environmental services, invertebrates are often ancillary. In wildlife conservation and research, priority is given to studies that are focused on large vertebrates. However, several other studies have also been done. Invertebrate groups include many types of insects, worms, and other invertebrates. They are viewed as pests and, by the beginning of the 21st century, the widespread use of pesticides had led to significant population declines in bees, wasps, and other terrestrial insects. Pictures of some invertebrates are given below:

What are the characteristics of living things?