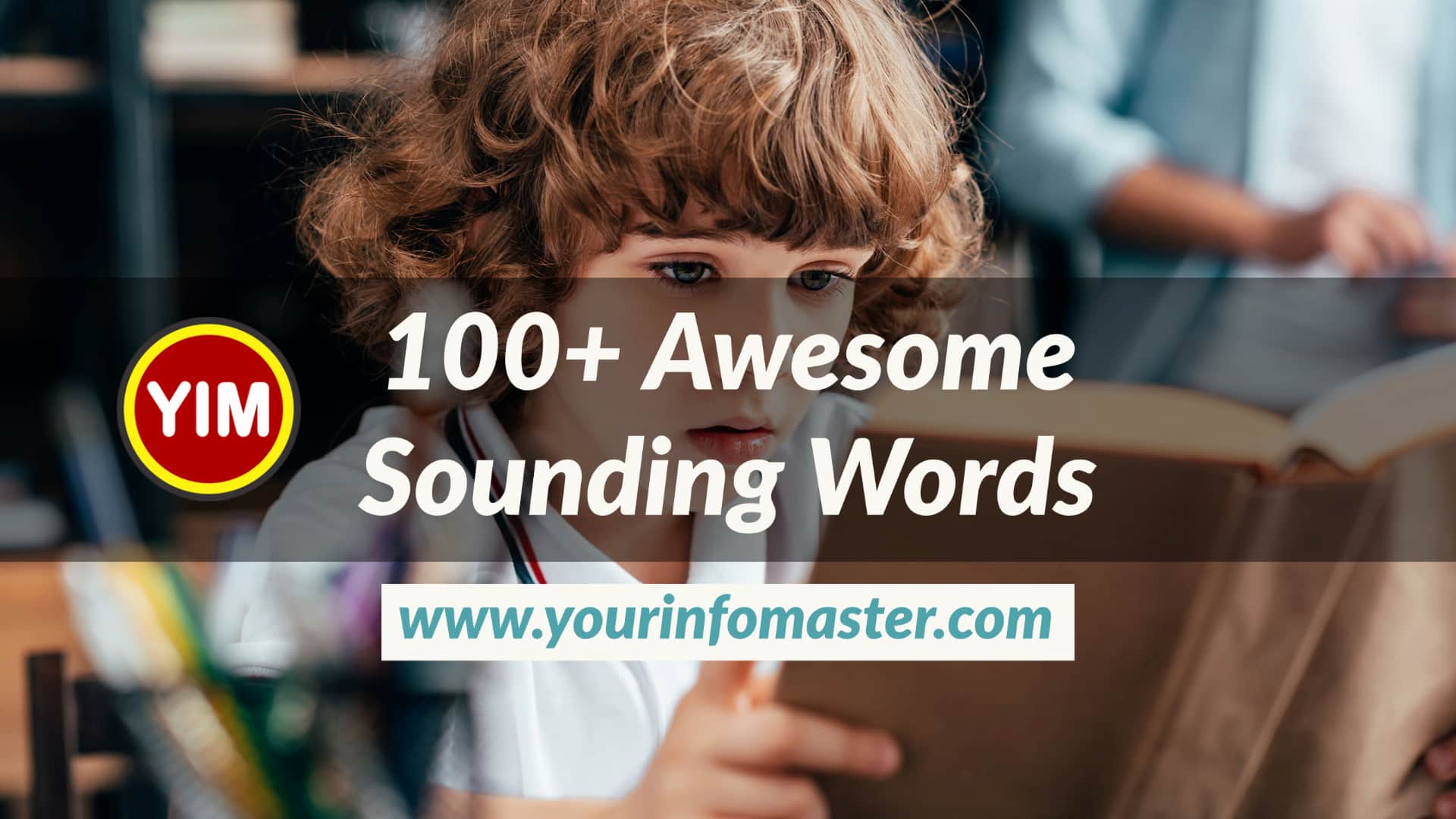 Are you searching for awesome sounding words, unique words, interesting words, cool words, epic words for your story, novel, or simply for everyday use? Look no more! In this article, you’ll find a list of 100 of the most awesome sounding words from the English language. A list of words that are unique, some commonly misused words, words which sound awkward and funky!

Awesome Sounding Words make you look smart once you adjust them into your daily vocabulary. Check the list of awesome sounding words to see how many you already know, and which one you will be able to add to your own speech and novel writing.

Unique and cool words are so interesting, they may be both good enjoyable and hard to learn. If you look at a unique English word, you might be confused about how to pronounce it, or you may wonder why it’s spelled the way it is.

Awesome Sounding Words can be useful when you love playing word games. Many of these words might not be used very often which may put you at an edge to win!

And now, here are 100 cool English words to add to your vocabulary! Every word’s pronunciation has been written out next to it according to the well-known dictionary Merriam-Webster’s pronunciation guide.

(adjective) having a pleasant smell, pleasing to the sense of taste, scented, aromatic, fragrant, perfumed, redolent, savory. e.g ambrosial tropical fruits, the ambrosial air of a greenhouse filled with orchids.

(adjective) relating to, resembling an apocalypse or being a major turning point, climacteric,climactic. e.g the apocalyptic Battle of Stalingrad, which led to the ultimate defeat of Nazi Germany.

(verb) to make known openly or publicly, to announce something, advertise, announce, broadcast, declare, enunciate, flash, publicize, publish,release. e.g a minister is wise to annunciate past minor in front of media.

(verb) to cause to believe what is untrue, a state of confusion by being deliberately fooled or misled, beguile, bluff, deceive, delude, fake out, fool, juggle, misguide, misinform, mislead.

(noun) a scarf worn on the head, bandanna, handkerchief, kerchief, hankie, madras, mantilla, an elderly Russian woman with a babushka

(verb) to fly, turn, or move rapidly with a vibratory sound, burr, buzz, drone, hum, whish, whiz, chirr, churr, a fly bumbling around the room while we were trying to sleep.

(adjective) different from the ordinary, strikingly out of the ordinary, bizarro, cranky, crazy, curious, erratic, far-out, funky, funny, aberrant, abnormal. e.g a bizarre product that no one could know how to use.

(noun) something hard to explain or understand, difficult problem, intricate, difficult or confusing question to answer, mystery, mystification, puzzle, puzzlement. e.g. the conundrum of how the village people were able to construct such massive structures.

(noun) the action, process, or effect of corroding, destruction, a gradual weakening, attrition, erosion, waste e.g the corrosion of family values that is often brought on by great wealth.

(adjective) facts or feelings actively impressed on the mind through personal experience, alive, apprehensive, aware, conscious, mindful, sensible. e.g not fully cognizant of the details of the trade agreement.

(noun) the former capital of Turkey.

(adjective) showing a shameful lack of courage, characterized by underhandedness or treachery, chickenhearted, cowardly, craven, gutless, pusillanimous, recreant, frightened, scared careful, cautious, spineless. e.g his dastardly conduct in a special moment haunted him for the rest of his whole life.

(adjective) of, relating to, or characteristic of the devil, worthy of an evil spirit, cacodemonic, demoniac, demonian, demonic, devilish, fiendish. e.g the police quickly mobilized to track down the diabolical criminals before they struck again.

(noun) a silly, dumb or stupid person, airhead, birdbrain, blockhead. e.g you’re a dimwit if you think I’ll sell my house for that price.

(noun) a state of intellectual and emotional balance; a state of balance between opposing forces, balance, counterpoise, equilibration, equipoise, stasis, poise. e.g we must find an equilibrium between commercial development and conservation of our natural treasures.

(verb) secretly listening to another person’s conversation, overhear, spy, surveil. e.g a nosy traveler who likes to eavesdrop on his fellow airline passengers.

(adjective) delicate and beautiful, marked by flawless craftsmanship or by beautiful. e.g felt such exquisite anger at being betrayed by a so-called friend.

(noun) a soft jelly, porridge made with flour, any of several sweet desserts. e.g. The sit-down buffet supper will feature menu items from the era including chicken marsala, salad, chicken fettucine, shepherd’s pie, flummery and trifle.

(noun) a conical cap for slow or lazy students, a cap or hood usually with bells worn by jesters. e.g. Think of Dickens and piles of foolscap and quill pens and Bob Cratchit.

(verb) to divide into political units that give one group an unfair advantage, arranging, concerting, concluding, hammering out. e.g. gerrymandering urban districts to give rural voters a majority.

(noun) a person from a backwoods area, e.g. Other kids called her a hillbilly because of her accent and her simple clothes.

(noun) the art or act of inducing in a person a sleeplike state during which he or she readily follows suggestions, hypnotism, mesmerism. e.g. with hypnosis there’s some question as to just how involuntary the actions of the hypnotized person really are.

(adjective) related to government, autocratic, authoritarian, jackbooted, oppressive. e.g. A totalitarian state that did not even allow outsiders to visit.

(noun) a quadrilateral having only two sides parallel

(adjective) that can be found anywhere, often observed or encountered, common, commonplace, everyday, familiar, frequent, household, ordinary, quotidian, routine, usual. e.g. by that time cell phones had become ubiquitous, and people had long ceased to be impressed by the sight of one.

(noun) a dizzy confused state of mind, a sensation of the environment around us is moving or spinning.

(adjective) having negative attributes, Like a Villain, not conforming to a high moral standard; morally unacceptable, bad, dark, evil, immoral, iniquitous, nefarious, rotten, sinful, unethical, unlawful, unrighteous, unsavory, vicious, vile, wicked, wrong. e.g. villainous behavior that made him one of the most notorious figures in history.

(adjective) a person who has magical powers, of the very best kind, A-OK, A1, awesome, bang-up, banner, beautiful, blue-chip, blue-ribbon. e.g. a young Brit who’s a wizard tennis player, although not ready for Wimbledon just yet.

(noun) A yellow discoloration of tissues, a type of skin-related disease.

(noun) Not smart in one thing, good in everything else, best. e.g. Dude, you are one xanthoriatic guy.

(verb) not straight, a course having alternate lines, to move suddenly aside, dodge, duck, jink, sidestep, slalom, weave. e.g. the fleeing car zigzagged down the highway at breakneck speed.

In the end, because unusual English words are used less often, using them will cause you to sound smart.

While writing any material on any topic, you have to keep vigilant about your targeted audience. Cool words with cool meanings can help you in portraying your content in much unique way. While adjusting these words in your content, you will eventually see a difference of opinion from critics.

Not just that you can also use them while displaying or giving an oral speech towards a larger crowd. What these cool words can do is they will ignite an awareness of focus in the hearts of the audience.

If you really enjoyed 100 Cool Words, I’d be very thankful if you’d help it spread by emailing it to your friends, or sharing it on Twitter, Instagram or Facebook. Thank you!

Did you read some Awesome Sounding Words on the way? Which one you are reading—and how it is similar to one of these?

If you need any word meaning, let’s know, we will write explanation for you!

Related Topics: If you really enjoy Awesome Sounding Words, then there are some more interesting articles for you!